Guide to playing in Serpuhov effectively 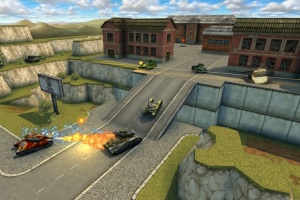 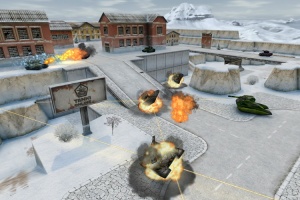 Overview: Serpuhov has been one of the most popular maps throughout the Tanki Online history, not for weak reasoning; sporting a stage design supporting tanks of all styles and formats, it's no wonder how this map managed to become such a lucrative commodity. You can find one or two healthy matches at basically any rank at any time of day.
Battle Modes: DM, TDM, CTF, CP
Size: 20 players, 10 vs 10

Serpuhov is the poster boy for a medium sized map -- collections of buildings near bases for suitable defensive measures, a wide central area for tanks to traverse, and even multiple levels of terrain, with the red team's base having a higher elevation than that of the rest of the map. A bridge spanning one side of the arena and a series of cliffs lining the other means that there's always an open route to either base, but if you're feeling brave, there's always the plains to charge across, a health kit usually waiting patiently offset from the center.

Several combinations tend to stand out in the fray of battle for notable reasons, but by no means does this imply that they're guaranteed to fare better than the others under any weather on Serpuhov. Similar combinations or even those that utterly contrast may wind up taking first place for themselves or their team. Here's a few examples of some interesting tank designs.

Both bases in Serpuhov are incredibly open to attacks, having three well-defined routes and many smaller routes. You will need to have more than one person staying in your base if you want a viable defense, particularly a Freeze, Firebird or Twins. Having an Isida nearby only increases the overall effectiveness, possibly allowing for the defender to use more from the mid-ranged arsenal, such as Thunder or Vulcan. Don’t forget to place mines as well, notably near the ramps and just inside entrances to alleyways. Just don’t overdo it, as a single death will destroy all those precious mines and waste your time. A sturdy mid-fielder such as Viking / Thunder or Dictator / Smoky can clain territory on the bridge for the red team, whereas a crafty Shaft for the blue team means nothing can pass on that side.

As for attacking, you would want to take the path that has the best cover to get to the flag, but the quickest path back to the base. Naturally, this would mean that the sides grant the most benefit, having excellent cover through the guise of either a valley or a wall of rock shielding you from view. It may not be possible to access either of those immediately, but some of that lucrative mid-field support might just be enough for you to plow through the team's outer defenses and reach their flag. Any turret can perform well; it just depends on what you are comfortable with and what you are trying to do. For example, Firebird and Hammer are great for clearing the area around the flag, but a Freeze can simply cripple their opponents through the power of nitrogen-based rime, slowing down their efforts to crush you exponentially. Make sure support in the form of Isida is killed first. On the other hand, try and bring one or two with you, as they can support you long enough to get in and out in one piece.

Hornet or Wasp are excellent insurgents for nabbing points further away from home, but they won't last long without some support in the form of Vikings and Dictators. Ranged weapons are going to be oddly common in Serpuhov's CP mode due to the number of immediately accessible and defendable points for each team. The ones worth real debate are the points near and on the bridge and the one smack in the middle of the arena. The latter is a kill zone, so expect to be hit with all variations of Thunder, Shaft, Smoky, et cedera. Heavy hulls are only as useful as the Isidas guarding them, so be sure to have one follow you around when targeting the central point.