Guide to playing in Scope effectively 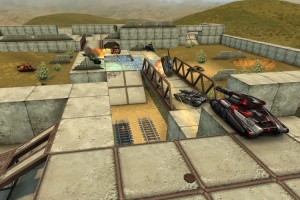 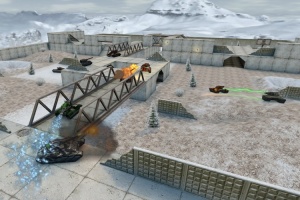 Overview: Scope is an incredibly unpopular map. It's a rare day when a battle survives for most of the day, despite the stage having unique aspects that cannot be found anywhere else. Scope, while not among the ranks of Polygon and Island in terms of abundance, still offers an excellent variety of gameplay options, granting opportunities to support every turret and hull.
Battle Modes: DM, TDM, CTF, CP
Size: 20 players, 10 vs 10

Scope balances on the border between being a medium and large map. A massive open space sprawls between two cordoned bases, leaving each side and the no-man's-land clearly defined. There is a long underpass that connects the 2 sides as well. Aside from the apparent routes across the field between several entrances and exits on the ramparts, there is a small network of tunnels underground that travel beneath the stage. As this stage can support all kinds of metallic life, there's no surefire winning combo right off the bat, as the situation can change drastically between individual players. However, a few manage to just stick out among the multitude of other combinations.

Both bases in Scope are quite well covered. Each construct is built like a castle: few entrances, high walls, and plenty of ways to attack from above. These traits make the buildings easy to defend, but at the same time, it also means that the tunnels become far more favorable. Dividing your attention between the lower entrances and the main gate is necessary to properly defend your side. A Hunter / Twins with good aim will do for blockading an area and patrolling, but if you're looking for a more stalwart approach, Mammoth / Thunder has been known for being nigh undefeatable with a few supplies. As for attacking, you would usually want to take the underpass to get to the base. The open areas in the middle can be used as well, but often there are quite a few Shaft and Railgun patrolling that area or scouting from directly above. It’s recommended that you use Hornet or Wasp for offensive maneuvers, as the other hulls just don’t quite have the speed needed to get in and out with the flag and outrun the other team if needed. However, medium hulls are great at supporting the attack and blocking off the enemy as needed. Any turret can perform well; it just depends what you are comfortable with and what you are trying to do. For example, Firebird, Thunder and Hammer are great for clearing the area around the flag, Ricochet is capable of attacking from behind cover, and Smoky or Railgun is best for attacking the enemies at a range. If you decide to use Shaft, remember that you're their lifeline in the event of a retreat. This means clearing the way for them or taking out pesky opponents is a must when the opportunity becomes available.

Hornet or Wasp is great for getting to those control points that are closer to the enemy base, but have a Viking follow up quickly to keep the point under your team's control. When partnered with a powerful turret that can lay into opponents quickly, such as Firebird, Freeze or Twins, you become both fast and extremely deadly. Even Isida can potentially whittle away at enemies and add to its own survivability, but they may be better suited for a support role over a purely offensive one. Once the points are sorted out between teams, the real battles ensure, usually a push and shove between the central ones. Mid-fielders are more important in this battle mode, allowing Dictator to roam the fields with any moderately ranged weapon and wreak havoc upon anyone who dares pass through the enemy gates.