Guide to playing in Rio effectively 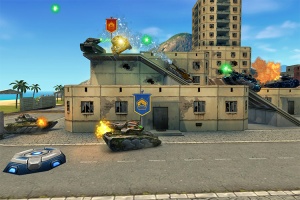 Overview: Rio is a very popular map around the lower and midpoint ranks. However, you'd be quite lucky to see constantly active battles at higher stages, although its popularity seems to be overall on the incline.
Battle Modes: DM, TDM, CTF, CP
Size: 20 players, 10 vs 10

Rio is the kind of map where anything goes, with no turret or hull majorly standing out. However, there are a few that are quite strong in certain positions of Rio

Both flags are quite open and have many paths to and from them. In defence, a short-medium ranged turret and heavy hull will do the trick, although it's not uncommon for Hornet or Wasp / Freeze players to doggedly pursue anyone who dare tries to trespass on their territory. A Vulcan emplacement is never a harmful decision, either, being able to effectively deter Wasps trying to grab the flag at close range and whittling away at distant tankers' health, possibly eliminating an entire route for their side to advance through. Having an Isida nearby is always a good idea, as it will help you hang on just a bit longer when your enemies swarm at once. Don’t forget to place mines as well, especially on ramps and through tight alleys.
As for attacking, pretty much anything goes. It’s recommended that you use Viking, Hunter, Hornet or Wasp as the other 3 hulls just don’t quite have the speed needed to get in and out with the flag. However, as previously mentioned, they're an exceptional choice for support roles, taking out enemies as your lead advances. Any turret works, but try to get as many different turrets through your team as possible. This will make it harder on the attackers as they can’t rely on a single module alone to protect them from everyone.

Hornet is great for getting to those control points that aren’t very close to any one's spawn point, such as the top of the buildings or point E on the beach. Mount a powerful, high cumulative damage turret, such as Firebird or Twins, since that makes sure enemies cannot take advantage of beating you in a 1-on-1 as they will have only a few moments to live. Viking is good for hunting down points that are occupied by enemies as it a take a few hits. Viking should be mounted with a proximity-based spray type weapon, like Freeze or Firebird. Having the ability to damage many opponents at once through piercing other tanks is a valuable one in any CP. Long range turrets such as Magnum can effectively be used to attack enemies from the safety of your base as well.