Guide to playing in Rift effectively 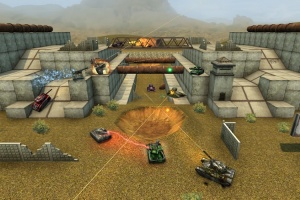 Overview: Rift is a medium size map featuring two large structures with a passage between them. A walkway in conjunction with a few pipes are the only items bridging this gap. While considered a fairly rare map, its unique design allows for many entertaining battles.

Rift’s layout ensures that there are several points in which players will clash and engage in close quarters combat, thanks to the fairly narrow passageways on higher ground and below, leaving only the secluded reaches of the stage to support long-ranged combat.

The first two points are the areas on top of the two large structures in the middle of the map. Due to the symmetry of the map, players are likely to clash here. The size of the map means that light or medium hulls are recommended to allow quick movement up the ramps and around the structures. Short range turrets such as Freeze and Firebird can be used, although turrets such as Twins and Hammer may be more preferable as their effective damage range can cover a bit more distance on some of the lengthy lower portions of the map, should you happen to be caught on open ground.

If you cover ground fast enough, you can also attack via the valley in the middle of the map. Once you emerge at the enemy side of the map, you will often be able to catch a few players by surprise as they respawn, however, without supply usage you are unlikely to last long when enemies retaliate from range. If you can't fight them from a distance, stick like glue to the ramparts above and as far away from the central channel as you can.

Rift has several areas which allow for effective camping techniques to be employed. The first areas are at the tops of the two structures. Granted, you're more likely to be ambushed by close ranged fighters from around blind corners, so camping with heavy hulls and possibly medium or proximity based turrets are more effective. An unorthodox form of camping, but has proven to be effective when your opponents are bottlenecked towards you from two or three distinct routes. Twins and Ricochet have excellent use as suppression weapons in conjunction with a heavy hull, and Vulcan can serve this role well to even bring the fight to players across the gap from your location.

With some suitably equipped teammates, you can defend your elevated vantage point in TDM with more traditional methods involving long ranged combat. The pinnacles of these two constructs include an exemplary view of the enemy team’s spawn area, making tackling enemies attempting to flee up the ramps easier than shooting fish in a barrel. The ramps which allow access to this position also allow you to make use of mines to slow down incoming attackers, if not deal enough damage to force them to think twice about diving in front of your bullets. This, combined with the sections of wall which provide cover from counter snipers, and the bridge which allows you to change positions makes this position highly effective in both DM and TDM.

The other option for camping is simply to remain at the back of your team’s spawn area, at either end of the map. This provides you with a view of enemies at the top of the structures (the previously mentioned area), as well as a view through the centre of the map, towards the enemy spawn. Railgun or Shaft paired with a medium or heavy hull would be most useful here, as you will most likely remain within a small area and will draw fire from opposing ranged tankers. This camping area is more likely to be useful when your team is playing defensively; if your team has pushed forward, move with them to one of the towers or the central passage to keep up your kill accumulation.

Rift is a map in which the opposing team’s base areas are almost symmetrical, meaning the same attack and defence strategies apply for both the red and blue teams.

Due to the open layout of Rift, it is recommended that defenders stay reasonably close to the flag at all times, perhaps with the exception of a few ‘midfielders’ who could try to camp nearer the centre of the map (see previous section on “Camping”). A few sections of wall around the base area provide cover for defenders, which will be useful if enemy snipers appear at the top of the structures in the centre of the map. Defenders as a whole, however, are fairly vulnerable to attack from several routes, but only the central route takes little effort to traverse, giving you time to hammer away at their health until they're rendered incapable of moving forward.

A few medium or heavy hulls are recommended for defending, along with short to mid-range turrets, such as Firebird, Hammer or Twins. An Isida or two can also be useful for restoring defenders’ HP and backing up attackers, though with the low total player count, their roles will likely be divided between the two. Additionally, mines can be useful in slowing down attackers, though setting up a field before the flag might not be the brightest idea. Instead, place them on the ramps down from the structures in the centre of the map, as well as at the end of the valley between the two teams.

In Rift, there are three main paths of attack to the enemy’s flag.

The first and most obvious route is straight across the map, through the valley. This is the fastest route due to there being almost no obstacles, but with the major drawback of leaving you in plain sight the entire time, and there is almost no chance of reaching the flag without taking significant damage from ranged fighters. Pack some Griffon or Kodiak family modules if you're taking this route commonly.

The second and third routes are either of the structures to each side of the valley. You can ascend and descend over these areas using the ramps. This may take longer, but you are more likely to be out of sight of the enemy, especially for the first half of your journey. This also means that if you manage to grab the enemy flag, and return via the same route, you will have some shelter from enemy fire for the second half of your return. However, the invisibility works both ways; you could accidentally charge headlong into an angry Hornet / Freeze and be completely crippled by the time you make it to the flag, if at all.

Regardless of your attack strategy, a light hull is essential for a fast getaway, along with access to supplies such as Double Armour and Repair Kit to prolong survival. However, Hunter and Viking supporters have an opportunity to steamroll through defenses and pass along a flag to their swifter allies.

Rift CP consists of three control points. Points B and C are up on top of the structures in the middle of the map, and point A is below in the valley. These points are all approximately equidistant between each team’s base, meaning it is difficult to guess which point will go to which team to start off with. A potential strategy would be to try and hold points B and C, allowing you to jump down to point A and take it when the enemy team isn’t prepared for an assault.

Short or mid-range turrets are almost essential, along with medium or heavy hulls to aid survivability. Supplies are also highly useful in these circumstances, and a couple of motivated Isida can often be the difference between winning and losing. Expect turmoil around each point, and keep your eyes peeled for Shaft and Railgun users taking potshots at unfortunate souls.