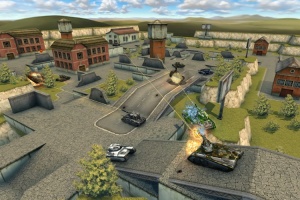 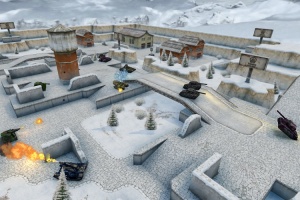 Overview: Compared to most other maps in Tanki, Red Alert is one of the most interesting and confusing maps. It has potential for close-quartered combat but also amazing long shots across the map. One of the main discussions that happen about Red Alert is about which side is better. This question will be looked at in greater depth later.

Red Alert is split into 5 sections in terms of DM gameplay. There is the slightly raised middle, and both an exposed flank and a tightly packed flank. Where the flags would be in CTF mode, are 2 very close quarter areas. This means, that out of 5 zones in Red Alert, 4 are close-quartered indicating that close-medium range weapons will do well here. Firebird, in particular, is effective, as its burning effect can mean that even after you die, as is common in Red Alert, you will still be able to claim kills.

Despite there being a lot of close-quarter combat, there is one very good place where a long range weapon can camp and gain kills quickly: 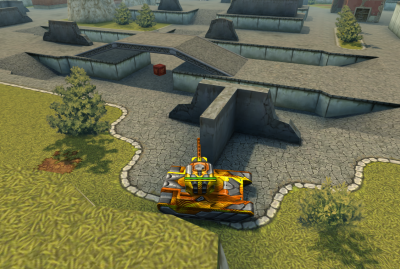 The above position is also effective with Smoky, Magnum or Thunder.

In CTF mode, 1 team is on the raised side of the map, the other lower down. The big question is which side has the true advantage. This question has been debated many times, and I will know look at it as well.

Does the Red or Blue side have an advantage?

As mentioned earlier, one of the fundamental differences between the two sides is the height. Quite simply, the lower side (Blue) has at least three entrances into its base, whereas the higher side (Red) has only two. Immediately this creates problems for the Blue team as they can be attacked on many fronts. This means they have to focus harder on defence, which will eventually mean their attack is less substantial.

Despite this problem however, it can be said that once the Blue side succeeds in taking the flag out of the Red base, it is very hard to return. This is partly because most of the Red team respawns are up the ledge, making it hard for them to follow their opponents who have their flag.

Along with this disadvantage for the Red team, when they take the Blue Flag, due to the ledge they have to climb up, it takes longer to bring the flag to their base. This gives the Blue team more of an opportunity to return their flag.

So, there is no clear overall answer to this question, however, the raised Red side does come with both its advantages and disadvantages.

Other Points about CTF

A good general plan for attacking the Blue side in Red Alert is to use diversion. Due to the high number of entrances to the base this is quite easy to pull off. One group should attack from the left/right and distract the defenders. The other attacking group should attack from a different side or route and will find a virtually empty base from which to take their enemy's flag.

The mark of top clans, is realising when this trick is being pulled on them and responding accordingly.

Capture-the-Point mode in Red Alert is interestingly unusual. Two of the Points are in raised areas and are therefore very exposed. This essentially means that these two Points will generally stay in one team's possession. This is because it can be defender without being next to the point itself. In many cases, when a player tries to capture either of the two exposed points they will be killed before they have time to do so. In contrast, he real fight is for the sheltered point as it can be approached stealthily. Therefore, try and control the two exposed points, as once you have captured them, it will be extremely hard for the enemy to re-capture them from you.

In Red Alert this is mainly a game for the close range weapons, just like DM. Isida's can be useful to accompany a heavy hull advancing into the enemy base.