Guide to playing in Polygon effectively 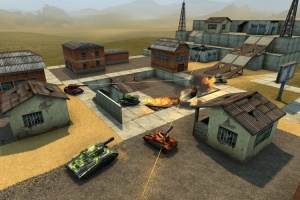 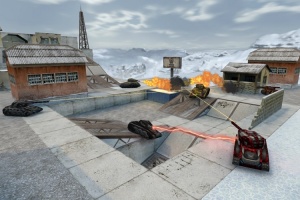 Overview: Polygon is a medium sized map featuring several different levels and a variety of buildings and structures. Its unique and dynamic layout makes Polygon a popular map through both high and low ranks.

Polygon’s design allows for almost any turret/hull combination, however, turrets with medium to short-ranged tend to fare better than the likes of Railgun and Shaft in most locations. While these two can survive if they utilize the cover from behind buildings and the shelf near the back of the stage, the center of the field is usually going to be dominated by weapons of closer range and higher cumulative damage.

The majority of close quarters combat takes place in the very center of the map, both in and around the shallow pit defining the map. Whether you’re playing DM or TDM, this area will always be heavily populated, as players respawn and head back to the center to face their opponents repeatedly. Live, kill, die, repeat. Fairly simplistic, the only controlled objective being how many you manage to take with you in each life cycle.

Light hulls are viable for rapid strikes in succession, although medium and heavier hulls are recommended for total field submission that DM-lovers crave so greatly. You will need plenty of armor in order to remain anywhere of note on the map for any extended period of time (i.e. the central pit, the Double Damage spawn points, the main entrance to the cliffs). Many of the spawn areas are within a stone's throw from the core of the map, meaning the slow speed of your heavy hull shouldn’t be an issue when roving a torus about the pit and slaughtering everyone in the vicinity.

As expected, close range turrets such as Freeze, Firebird and Hammer are all effective for this role. Twins can also be especially useful in distracting and destroying enemies, especially those with lighter hulls that may try to outflank you and drive circles around you just because you're a Mammoth. Where possible, supply usage can truly help change the outcome of a battle. In TDM, several teammates using Double Damage and Double Armor can enable you to take charge of critical supply drop points, the surrounding buildings, and a vast majority of the map's spawn points. Add in a couple of Isidas, who can take cover in the small tunnel in the pit and behind the shade of the outlying buildings, and your team will quickly succeed in creating the most one-sided match ever.

If getting up close and personal isn’t your style, there are several areas which allow you to take on enemies from a distance. Granted, since high cumulative damage rates are the name of the game around Polygon, you might have a bit of trouble fitting in as a sniper, but at the same time, few are prepared to tackle a Railgun or Vulcan in the midst of a swarm of Wasp / Firebirds.

There are multiple buildings around the edge of the map, many of which allow you to peek out from behind cover and fire towards the primary battlefield. However, the two most notable areas are the elevated sections at opposite ends of the map. With both sides sporting an excellent view of a select portion of the map, there's never not an opportunity to let loose a few rounds into the back of some poor sucker's engine, as players are constantly on the move and trying to pick a fight with someone. However, with these choice fish-in-a-barrel sniping spots come quite a few drawbacks, the first of these being your fellow snipers. They won't be comfortable with someone else nearby with the potential to rip them to shreds without getting close, so you're bound to be a target. Worse yet, they may take the brunt of your kills away from you, rendering your tactful position moot. Secondly, in DM specifically, you may find enemies spawning nearby, or even behind you, making camping for extended periods of time difficult unless supplies are used effectively. Even so, there's always an errant Twins, Ricochet or Hammer that'll catch you off-guard and stop your kill streak cold.

Turrets such as Railgun and Smoky are recommended here for mid to long range sniping, although Shaft or Magnum may not be the smartest choice due to the mentioned risk of enemies spawning nearby and taking you by surprise. However, this does not render it completely defenseless; astute use of your weapon charge (i.e. not using all of it at once) and only entering scope mode when necessary are great ways to extend the longevity of your favorite sniper rifle for tanks. Thunder can also be highly effective for damaging groups of enemies who are fighting in the middle of the map, especially with the use of Double Damage. Being a mid-ranged weapon, it won't have trouble diving into the fray of battle itself, using its splash damage to maximum effect to clean house near the supply spawns.

In Polygon CTF, the opposing team’s bases are not symmetrical, meaning tactics differ slightly for each team.

Many players agree that the blue team’s base is easier to defend, due to it being on higher ground and only having two paths into the base to defend. As all defending goes, being forced to funnel yourself is exactly what a veteran sentinel loves. Defending at the ramps is often advantageous, as you have the opportunity of pushing and flipping tanks as they try to speed into your base, notably so with weapons with high recoil, such as Twins cumulatively and Hammer instantly. Ricochet also gets a special mention here due to being able to fight from behind the house, so long as they aim carefully and don't strike the jersey barriers themselves. Mines should be used plentifully and frequently, and long-ranged modules should be standard issue.

On the other hand, the red team’s base may appear more vulnerable to attack, although it does have a few significant tactical advantages, the main one being the large building blocking the line of sight of the blue team until they're directly on top of the flag. Not having a read on the number of potential defenders available and diving in anyways is akin in stupidity to kicking a beehive on the ground because it looked abandoned. The red team also has access to high ground behind their flag, allowing snipers to break up incoming attackers before they get too close and make the lives of the proximity defenders easier. Ricochet works even better here due to all of the planar surfaces to launch projectiles from. Mines as a whole will be less useful here than on the blue defense, but it wouldn't hurt to have a few lying along the right exit, or even the slopes near the Double Damage station should someone try to make a crafty breakaway.

The team’s flag bases in CTF are relatively close to each other, meaning attackers will once again often collide near the center of the map. The tactics from ‘Close Quarters Combat’ under the DM/TDM section will apply here just as well as they did in DM/TDM, with the only difference being light/medium hulls may be preferred for speed over heavier hulls. Bear in mind the stability gap for lighter hulls when it comes to invading the blue team's bastion.

There are sometimes opportunities to flank around the combat from behind the outermost buildings and sneak up on the enemy base, although players tend to catch onto this tactic fairly quickly. For a quick swipe during the beginning of the match, the outermost routes would be greatly appreciated. Honestly, after that, there's no telling what's going to happen, the stage is a bloodbath. Take shelter behind what buildings you can, but make sure never to pin yourself in a corner. It's a fairly easy position to wind up in around alleyways, where each side can be effectively blockaded by angry tankers.

Polygon is one of the most popular maps for Control Points, and this is largely due to the fact that most of the fight in map there is for only a single control point, located in almighty pit of the map, the stage's ultimate focus and visiting point. The layout of the map means that players are almost funneled towards this area. This is no uncertainty in Polygon CP, no decisions need to be made. The sole objective is to capture and hold point A, and this is the reason why Polygon CP sees some of the most heated warfare in the entire game. Although Points B and C may fall in hands of the powerful team, Point A provides equal opportunity for both teams to dominate in the battle if each team captures B and C respectively.

Almost all recommendations from ‘Close Quarters Combat’ under the DM/TDM section apply here. Heavy hulls and generous usage of supplies are often the key to taking over the control point, and from there it’s a struggle to hold the point for as long as possible before the enemies return and the situation reverses. A couple of Isidas with Double Damage and Double Armor can be very helpful, not only for healing your teammates but also for quickly destroying unsuspecting enemies.