Guide to playing in Pass effectively 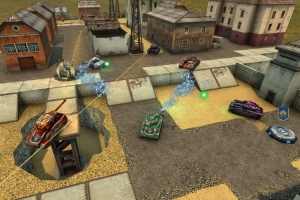 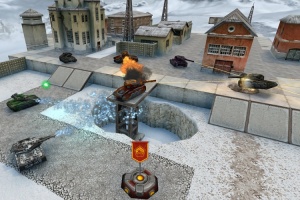 Overview: Pass is a medium map. It is tiny and it can be excellent for Tandem battles. It is not common and it is rarely found on Tanki Online servers. This map can be really great for tandem tournaments. An older version of it had an awesome secret room in the middle.
Battle Modes: DM, TDM, CTF, CP
Size: 5v5, 10 Players

Camping on Pass follows the same basic principles as most other maps.

When you are camping, you will need to try and be as sneaky as possible. You should try to steal kills rather than killing someone alone as this will keep you well-hidden. Target the weakest player as every kill is equal. Double Damage will be your best friend while camping, so make sure you have plenty on hand. The best places for camping on Pass are:

Deathmatch and Team Deathmatch on Pass is similar to any other map .The best way to finish top in a DM/TDM on Pass would be to keep moving around the middle of the map. Moving targets are much harder to hit, especially at close range, so this will probably be your best bet at staying alive as well as dealing damage to as many tanks as possible. The best turrets for this tactic are Firebird, Freeze, Hammer, Striker, Smoky, Twins and Ricochet mounted on top of either a Hornet, Hunter or Viking. You’re best way to stay alive would be to avoid clusters of tanks but instead, shoot at them from somewhere they won’t be likely to fire back at you. When reloading, take cover behind a fence or house to try and prevent taking too much damage.

The best way to defend in Pass is with Medium-Long range turrets and a Medium Hull. As the area around the flag is big, mines are not really effective. Behind the barriers or down the ditches on both sides provide great cover from enemy fire and keep you well hidden. Spread out your defense. As pass holds a small 5 players per team, you will need to make use with only 1-2 defenders. One defender positioned behind the ditch and one hanging around the front of the base work quite well. They can attack enemies from 2 sides, making it hard for the attacker to kill both defenders and get away. An Isida alongside really strengthens the defense, as it means that the defenders don’t have to rely on their repair kits being ready in time.

On the attack, light-medium hulls are the best as they provide the speed to get in and out quick enough. The best way to get past a strong defense is to target the Isida and the mine layer. The Isida is the most important as they will keep the defense topped up with health. The mine layer is the second most important, as their mines will deal a mass amount of damage instantly, generally 1-2 hitting a light-medium hull.
Try and use covered routes. The best way is for Red and Blue team to go to the left hand side (while looking towards the middle) when they are moving forward. Both ways lead almost directly to the flag so there will be no wasted time in the enemies’ territory.

The tactics for Control Points are the same as they always were, get to the point and try hold it for as long as possible, especially with the new update. Mammoth and Titan are not particularly effective in CP mode because they are slow and not maneuverable, they only work when controlling the point in your base. This is because their speed means it takes them a while to get to the point, so they will most likely have been damaged badly or killed by the time they reach the point. On a reasonably small map like Pass, using Mammoth or Titan is a great idea, because they have a mountain of health and getting to the nearest point isn’t at all hard, even for a Mammoth.
The turrets to use depend on what you are trying to do. If you plan to go and try stealing the point out of the enemies control, Firebird is the way to go. It has incredibly high damage, can damage multiple enemies at once and even if you die, the after burn can still take out the remaining enemies so you team can get in and steal the point. Hammer is also good if there aren’t many enemies going the point, especially if they are using light hulls or have already been damaged. If you plan to hold back and wipe them off the point from a range then attack then Smoky, Striker, Vulcan and Thunder are the way to go. Their max effective firing range is quite long so there is no need to worry about your shots not doing as much damage as they could be. If there are multiple tankers trying to clear a point, try spread out so they struggle to clear you all quickly. An Isida always comes in handy, especially while trying to take control of a point, so don’t be afraid to ask someone to take Isida, it could be the difference between winning and losing a close match.