Guide to playing in Parma effectively 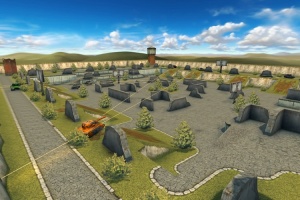 Overview: Parma is a medium sized map with an open design and small but frequent areas of cover. The relatively symmetrical layout of the map makes it a popular choice, particularly for XP format. Parma battles are fairly rare at low ranks, however they’re more popular at high ranks, mainly in the form of XP battles.

Despite the open design of Parma, the small but frequent areas of cover make camping an effective strategy. The raised area around the edge of the map provides multiple areas of cover, along with views across the entire map, including the enemy’s spawn in many cases. Mid to long range turrets such as Thunder, Magnum and Railgun are recommended to allow effective sniping from across the map. Short range turrets are likely to be ineffective for the majority of encounters in Parma.

The small sections of wall along the sides of the map are usually the most popular choice when it comes to camping. These spots can be effective although a small, light hull is recommended to ensure the edges of your hull do not protrude from behind the wall. An accurate enemy sniper will be able to take advantage of this.

Additionally, there are four towers, one in each corner of the map. These are particularly useful as if you can hide behind the right tower, you will have a view along the length of the enemy’s spawn area. Several tanks will often be lined up here, making Railgun a devastating weapon if your attacks are timed carefully. Supplies such as Speed Boost can be used to quickly move to and from areas of cover, while evading enemy snipers. Double Damage can also be useful in quickly destroying your opponents before they get the chance to return fire.

The layout of Parma makes any form of close quarters combat a difficult practice, however there are numerous walls in the middle area of the map, which make a close-ranged assault possible if you make use of the cover to evade snipers and sneak up on your enemies from below. If you can cross the map, and reach the ramps at the base of their spawn area, you will likely guarantee yourself several kills if you make use of supplies and surprise the enemy as they respawn.

In Parma, the opposing team’s base areas are symmetrical meaning the same attack/defense strategies apply to both the red and blue teams in CTF.

The key to defending is to spread out and make use of the wall sections along the edge of the map. All too often, several players will try to camp around the tower, directly by their flag. This not only reduces maneuverability, but also leaves you prone to being wiped out by Railguns who approach from the sides. If the defenders are spread out along the wall sections, they will have several angles of sight across to the enemy’s side of the map. This often means that an enemy will reverse behind a wall to evade fire, but then protrude from the other side of the wall and make themselves visible to one of your teammates. The particularly small sections of wall in Parma make this a frequent occurrence, especially if the enemy is using a larger hull.

As mentioned under ‘Camping’ in the DM/TDM section, longer range turrets are recommended for defense, and smaller hulls can be useful for hiding behind cover, although whether this outweighs the drawback of less armor is debatable.

Attacking in Parma can be a difficult practice. The vast open space of the map will often result in the majority of the team staying in one area and sniping across the map. This means that when the odd player actually attempts to coordinate an attack, they are easily picked off before they can get close. The most important tactic is to attack as a group. The elevated position of the defenders will guarantee that your teammates are picked off as you advance, but if several players advance at once, the opportunity to grab the flag will appear. The quickest escape route with the flag is directly through the middle of the map. This may appear to be a death-wish, as enemies will have easy line of sight from their spawn, however the majority of useful supply drop zones also happen to be located in the centre of the map, including Repair Kits. Furthermore, your team’s defenders should be able to push forward and provide backup, should you be destroyed while escaping.

As is often the case, light hulls are recommended for attacking effectively. Supplies such as Speed Boost and Double Armor can also be useful in extending your survival.

Parma CP is made up of five control points; quite a large number considering the layout of the map. The positioning of these points means that at the beginning of the battle, points C and E will likely go to the red team, with points B and D going to the blue team. This leaves point A to be contested. Due to this, the centre of Parma is usually the point at which the majority of conflict will be taking place between the two teams. As is usual with CP, short or mid-range turrets along with generous supply usage and medium or heavy hulls is likely to be the best way to fight for sought-after control points. An alternative tactic would be to try and flank around the combat in the centre of the map, and go for the points closer to the enemy team’s spawn area. Enemies here will likely be in a hurry to travel back to the centre of the map, and with some stealth, it may be possible to capture one of their points and gain your team the upper hand.