Guide to playing in Noise effectively 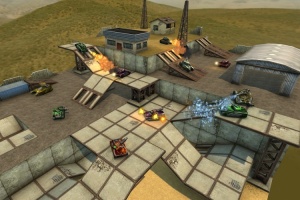 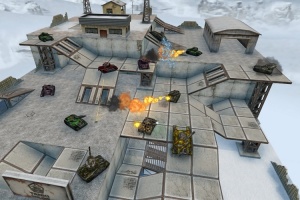 Overview: Noise is a very popular medium map. However, It can be a very one sided match.


It is commonly played on throughout all ranks, and CTF is the most popular mode on this map. XP/BP battles can often be found on Noise, but they are extremely hard and take a decent amount of time to win.

If you want to win a DM, you have to either find a good spot where you can kill a lot of people yet stay out of the action, or constantly drive around killing anyone you come across, which generally means using supplies. The best spots to camp would be up high, so you can see all that is below you but stay out of other tankers firing ranges and sights. Try to kill the weakened tankers first, so you waste the other tankers ammo on a kill you got. The best turrets for camping would be Smoky, Railgun or Thunder partnered with Viking or Titan. If you would rather drive around killing everyone in your path, the best combos would be Firebird, Freeze, Hammer, Twins or Ricochet on top of Hornet or Viking. Keep in mind that there will be people waiting to steal your kill, so try finish your enemy off quickly. Another thing with this tactic is to get a decent amount of kills, you will have to use a few supplies.
A drugging Viking-Isida seems impossible to stop sometimes, so if you have a couple extra drugs you don’t mind using, try it out. 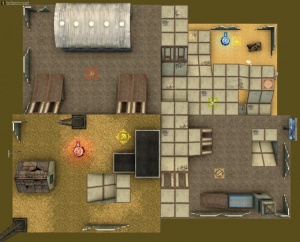 This is the hardest team to be in while playing in a Team Death Match. Because you don’t have the height advantage, you must be careful how you play. The easiest and probably safest is to let the other team come to you. Place mines around the entrances to your base, as it will take the other team by surprise. The best place to set up would be at the top of the ramp in the corner. A Vulcan-Titan with a few Isidas around him can easily clear a path for your team to attack through. The easiest path would be up the ramp to their base. Try hide in the tunnel and pop up to shoot at them so they deal little damage to you.

The red team has a massive advantage with height. They can shoot down onto the blue team while it is almost impossible for them to hit back. You need to use this advantage. Position a Viking with Thunder or Smoky at the top of the ramps so you have a good view of the middle and you are hard to hit.

The best combo to have guarding your flag would be Mammoth or Titan with either Freeze or Twins. They are not only hard to kill, but the freeze slows down the flag carrier giving you more time to kill him, and the twins constant firing means you can move from enemy to enemy without having to reload. Have a few Isidas staying around the base and midfield healing the defenders and keeping the attackers health topped up. While partnered with an appropriate medium hull, a few Hammers, Smokys or Ricochets hanging around can also make it super hard to get through.


Mining the base is a great way of defending. These little cookies lying around can deal a massive damage (around 1200-2400 HP) each so they can really come in handy when trying to stop a flood of tanks. The best place to mine would be around the flag, in tunnels or entrances to your base or mine bombing the blue team. For both teams, it’s hard to stop them getting the flag as it is easy to jump on from above, but when there are a lot of mines around the flag, it seems almost impossible to get away with it quickly.

Firebird is a really effective weapon on attack. Because it can burn multiple enemies at once, it has high damage, and it has its signature burning effect means it is perfect for getting into the base and wiping out the enemies defense. Another good weapon would be Hammer, It has high damage and quick shot speed, but its clip reload is slow so you need to be quick.


Viking, Hunter and Hornet are great hulls to attack with. Viking is incredibly stable, has a great health to speed ratio and sometimes you can even sneak under tanks that have their front off the ground and get away quickly. Hunter is also a great choice. It has great pushing power, meaning you can shove other tanks out of the way, it also combines good health and speed but the drift catches a lot of people. Hornet is best for the pick and go scenario. It should be used when the flag is free and there is a clear path you can take to. It can get out quickly and it can survive a few hits.

The tactics for Control Points are the same as always, get to the point and try hold it for as long as possible. Some may say Mammoth and Titan are the best of CP because they are hard to kill and harder to push, but on a map like Noise, they only work when controlling the point in your base. This is because their speed means it takes them a while to get to the point, so they will most likely have been damaged badly or killed by the time they reach the point. A Mammoth or Titan with Twins holding back is a good idea, because even if most of the other points are not under your control, you will still be putting points on the board.


The turrets to use depend on what you are trying to do. If you plan to go and try stealing a point out of the enemies control, Firebird is the way to go. It has incredibly high damage, can damage multiple enemies at once and even if you die, the after burn can still take out the remaining enemies so you team can get in and steal the point. Hammer is also good if there aren’t many enemies around the point, especially if they are using light hulls or have already been damaged.


If you plan to hold back and wipe them off the point from a range then attack, Twins, Ricochet, Smoky, Vulcan and Thunder are the way to go. Their max effective firing range is bigger than the map itself so there is no need to worry about your shots not doing as much damage as they could be. If there are multiple tankers trying to clear a point, try spread out so they struggle to clear you all quickly.


An Isida always comes in handy, especially while trying to take control of a point, so don’t be afraid to ask someone to take Isida, it could be the difference between winning and losing a close match.