Guide to playing in Gubakha effectively 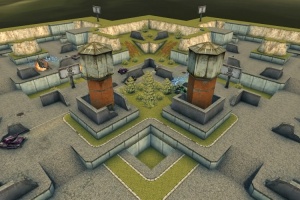 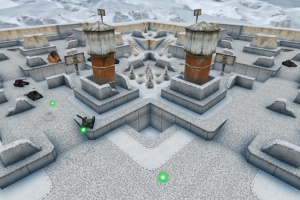 Overview: Gubakha is a medium map. We can consider it as the bigger Parma. It is not common and it can be found rarely on servers and mostly it is found in RU1. It is quite famous for XP/BP battles. It has medium battle funds as it is a medium map.
Battle Modes: DM, TDM, CTF, CP
Size: 10v10, 20 Players

Deathmatch mode is quite hard at this map, as you have to look around a lot and keep very alert due to the density of the map.

There are many spots to hide in, including the walls, there are too many of them in the middle of the map. Pick a spot with a wide and open view of the map but sufficient protection if needed. A good example is the high spots on either side (shown in image). They also have all 3 supply drop zones around them as well as easy to block ramps leading up to them.

The Hit and Run takes on a few forms. I will go into a few that are good for Gubakha.

Capture The Flag mode is exclusively quite hard, due to its narrow paths and hard to remember landscape, the mode needs a lot of thinking and a great strategy.
The Red and Blue flags are not beside each other, so you will need to be on the move for quite some distance. You need some teammates behind you especially Isidas to help you killing the opponents or healing you. Best turrets for this action are Isida, Ricochet, Thunder, Freeze, Hammer with Hornet, Viking, Hunter, Dictator or Titan. Never giving up is the key to the victory.
Defending is the easy part. Just slap a Mammoth with Smoky or Ricochet on top of the flag, lay a few mines around and give him an Isida friend and you are sorted. As long as the enemies don’t attack in packs you should be fine.

Gubakha has five CP points, each in very different parts of the map. Points B and C are in the high towers on either side of the map, and points A,D, and E are in the center points. The center points have a tendency to change hands very often, as they are all close together, whereas B and C are out of the main access area. These points can be the difference in a battle, but the main focus should be on the center 3.
These three points, even with the update, will give the team with them the win. However, due to their constant fluctuation, it is necessary to have have at least either B or C. Each of these points is near either many Blue or Red spawn points, making these easier captures, and even easier to hold.

Tactics:
Gubakha has many, many walls, making Ricochet's bounce shots very effective. This allows one to clear out a point without taking damage. However, make note of differences between the vertical walls and the earthen walls, so as to not screw up your shot. Magnum can also be used hit enemies without having to face them, hiding behind the walls.
Also, Thunders splash damage ability can use any surface to deal splash damage within its radius of damage. Moreover, it can, like Ricochet, clear out a point. This is effectively useful when a point is heavily occupied and one has Supplies On.
Finally, Gubakha has a plethora of walls, so while being wary of Ricochets is important, taking cover in this map is vital, due to it being a relatively small and dense map for a medium map. Tankers can be closer than they seem. So the brief moment of cover can mean the difference between life and death.