Guide to playing in Edinburgh effectively 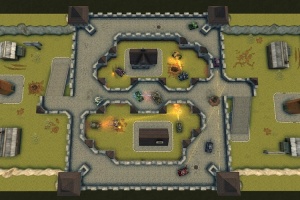 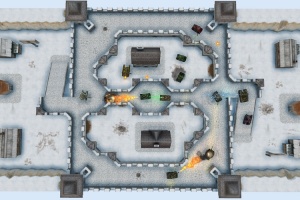 Overview: Edinburgh is a moderately small sized map, dominated by a large castle-type structure which is very similar to the one in Cologne. It was introduced relatively recently, named after the capital of Scotland, Edinburgh, which is famous for its castles. This map isn’t seen at high ranks, although it is a popular Save the Gold map.

The open area below the castle parts of the map provide a great battleground for close ranged combat. This, combined with several supply drop areas which are placed before and upon entering ensures intense squabbles for territory at all times.

A strong medium hull along with a turret such as Freeze, Firebird or Twins will work very well, and access to extra supplies will help you to survive for longer periods. Since Edinburgh is reasonably cozy, heavier hulls can also be used effectively, although travelling up the ramps up and around the castle can be time consuming. This strategy works better if you have a weapon that can defend yourself instead of bringing the fight to your opponents, such as Ricochet, Smoky or Hammer.

In Deathmatch and Team Deathmatch, there are a couple of decent camping areas. The small but long size of the map means you will need to be either very defensive or fast enough to dodge attacks. Long ranged combatants love to take advantage of the hallways through the castle, so if you choose the latter route, be sure to look before you leap.


The main area to camp is around the walkways around the top of the castle. You will have the advantage of the higher ground if you choose to sit around the ramps, allowing you to fire down on your enemies as they try to advance. A mid-ranged weapon such as Smoky, Twins or Ricochet along with a medium or heavy hull is recommended. This will allow you to attack your enemies from a range, while still being able to put up a decent defence against short ranged turrets.


The use of mines is highly recommended as it will allow you to slow down or even completely block enemies who are trying to travel up the ramps and walkways towards you. Remember to evenly spread out your mines, though. This will make it harder for a horde of tanks to get through at once. A neat trick is to intermittently space the mines along the lengths of the ramp;

When it comes to defending, both the red and blue team’s sides are basically identical in structure, leading strategies to be likewise identical. There are only 2 paths that attackers can use to get to both the red and blue team’s flag, so defenders will need to sit around the middle of the base to be able to control both access points. A couple of buildings provide decent cover in each base, and the ramp up onto the castle provides a good spot to pop up and shoot across to the other side of the castle, as well as block incoming attackers. This spot is best suited for a high-powered range weapon, but Railgun's high damage in conjunction with its lack of a need to stand still to fire make it the top choice for this spot.


Mines are also very useful when it comes to stopping an attack effort. Use them on the ramp down from the castle and under the archway that leads out from within the castle. This will slow down and critically injure or destroy attackers, if not immediately destroying them.

There are two main routes of attack to the enemy’s flag in Edinburgh.


The first route is along the top of the castle and through one of the 3 paths. You will end up very close to the flag. However, this a commonly used path, therefore​ making it a predictable plan of attack. There will often be defenders waiting near the ramp, as well as mines laid out.


The second route is around the bottom of the castle and out through the archway at ground level. This is a more effective path, as defenders will often be around the corner waiting for enemies to come down the ramp, just out of sight. However, you may still come across the other team’s attackers after they respawn and proceed to head through the castle back to your side. There is also a high chance of mines being laid in this area.


Regardless of your attack strategy, a light hull is essential for a fast getaway, along with access to supplies to aid survival. It may be wise to have a heavier hull nearby to pass the flag to, since quick hulls tend to be targeted more in an offensive situation.

Edinburgh CP has three control points. Points B and C are located in the 2 middle areas, while point A is located right in the center of the map, on the middle path of the castle. At the beginning of the battle, points B and C will most likely go to their respective team's side. The real battle takes place around point A, where wars of attrition generally take place.

The tactics for close quarters combat mentioned under DM/TDM will apply here for the battle to capture point A. Short range turrets are important, along with medium or heavy hulls to aid survivability. Supplies are highly useful here and a couple of Isidas that know how to play can often be the difference between winning and losing.