Guide to playing in Dusseldorf effectively 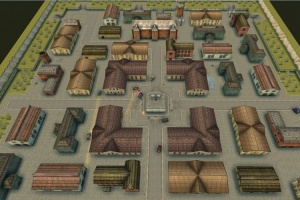 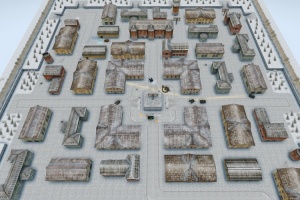 Overview: Dusseldorf is the third largest map in TO. It is home to some of the most incredible battles, and currently holds the record for the highest battle fund in a single match.

As Dusseldorf is such a cluttered map, it is hard to camp effectively, considering there are few areas where large portions of the map can be seen. However, this does not mean there aren't any effective sniping points scattered around. The main roads that cut directly through the sides and center of the map are a good first choice, considering you have a house to use as cover nearby. This sniping tactic is better for Railguns, which typically sport more mobility than Shafts.

The superior camping option when using Shaft involves the corners of the map, directly against the border. These are excellent sniper nests, as they have a wide viewing range and are not necessarily in the open. Their backs are up against a wall, which means they can focus on one direction, effectively keeping them invulnerable from the bow if they're a quick shot.

There are also a few other things a good camper must have:

The tried and true hit-'n-run strategy works very well in Dusseldorf due to sheer building density. You will likely be using a short or medium ranged turret like Firebird, Ricochet, Hammer or Freeze for this play style. Ricochet gets a special mention due to its ability to fight without being in the enemy's direct line of sight, taking maximum advantage of the many planar surfaces of the houses.

First off, set your camera high so you can see over those buildings and have a better idea of what is going on. (Remember to check low every once in a while, as distant sniping weapons might be looking for you, too.) Secondly, partner your choice weapon with a reasonably quick hull. Anything from Wasp to Viking will work. Next, you rampage around like a headless chicken, looking for enemies to make a meal out of.

This tactic is much harder to use effectively, as it requires you to be as unpredictable and sneaky as possible. While this is fairly easy on a map with so much prop density and obscured vision, you still could wind up strolling directly into a long-ranged fighter's crosshairs and be obliterated. The key to pulling this off right is to always try to attack your target from behind, keeping out of other tanks' line of fire. That way, when you are noticed damaging them, it will most likely be too late for them to retaliate. If you want to be a harder target to destroy, you will need to be constantly moving, hence the name hit-'n-run.

Another great tactic to use is the corpse shield. This is when you use another tank's corpse to protect yourself from an enemy’s turret. Specifically, the likes of Twins, Ricochet, Vulcan, Smoky and Hammer, the weapons that do not have piercing damage. This is helpful while reloading or trying to make a getaway from a strong tank. As Dusseldorf is a large yet cramped map, you will need to control your tank with nigh perfect precision, lest you wind up driving into the side of a wall by mistake, effectively ending your spree.

Defending in Dusseldorf is easy if done correctly. It is very simple to stop any attack, so long as you pick the right equipment and positions. Camping is a great way to defend in CTF, but you will need to know where to go and what to do there.

One last thing to watch for is where targets are coming from. There are many, many paths into your base, so don’t focus on one and leave the others unattended for too long.

Attacking in Dusseldorf is all about speed and agility, as the map is crowded with numerous buildings. It is near impossible to attack with anything heavier than Viking, since it takes a while for a heavier hull to escape from their side. Like always in Dusseldorf, keep your camera up as high as possible as often as you can, as this will allow you to see over the buildings that are around you and avoid enemies with less difficulty.

When going to take a flag, there are many routes available between the myriad of houses. Try not to only use one route, as defenders will pick out your retreat pattern out quickly and easily patch their defenses there. Taking diverse and complex paths through the residential districts will let you lose opponents with ease.


Another good way to target the flag is to come into the base from behind. The defending team may not always expect an attack from the stern, and you may be able to swipe the flag and get away before they have time to react. Just watch for Shafts and other long-distance fighters that might try to counter you on your way back.

Remember: when attacking, rarely use the central streets. They are extremely exposed, and you are a very easy target for a Shaft or Railgun. Zipping between buildings is the name of the game when it comes to offensive measures on Dusseldorf. The sides of the map are also good options, but keep your eyes peeled for long-ranged turrets hiding behind buildings or shrubbery.

The tactics for Control Points are the same as always, rush to the point and try hold it for as long as possible. As all 7 points are spread evenly around the map, heavy hulls should only be used to control the ones in your base. The most effective hulls for invasive measures would be:

The turrets to use depend on what you are trying to do. If you plan to go and try stealing a point out of the enemies' control, Firebird is the way to go. It has incredibly high damage, can damage multiple enemies at once without reloading, and even in the event of death, the afterburn can still take out survivors. If not, it may cripple them enough for your team to get in and steal the point. Hammer and Twins are also good if there aren’t many enemies around the point, especially if they are using light hulls or have already been damaged. If you plan to hold back and wipe them off the point from a range, then an attack with Thunder, Vulcan or Smoky is the way to go. Their max effective firing range is quite long, so there is no need to worry about your shots not doing as much damage as they could be. If there are multiple tankers trying to clear a point, try and spread out so they struggle more in clearing you all out quickly.

An Isida always comes in handy, especially while trying to take control of a point in conjunction with a moderately heavy tank like Titan/Thunder or Mammoth/Twins. Don’t be afraid to ask someone to take one of these healing machines if your team lacks one; it could be the difference between winning and losing a close match.