Guide to playing in Duality effectively 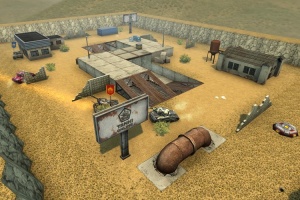 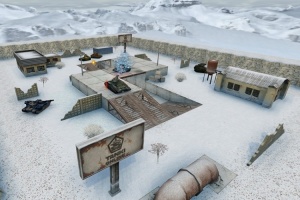 Overview: Duality is quite a small map. It isn't very popular throughout the ranks but is still home to some awesome battles.

This tactic is mainly used in Deathmatch but still applies in TDM battles as well. In order to pull off this tactic effectively, you need a few things.

While camping, you need to try and be as sneaky as possible. You should try to steal kills rather than killing someone alone as this will keep you well-hidden. Target the weakest player as every kill is equal. Double damage will be your best friend while camping, so make sure you have plenty on hand.

This tactic is much harder to use effectively as it requires you to be as unpredictable and sneaky as possible, which is difficult on a small map.

The key to pulling off this tactic effectively is to always try to attack your target from behind and keep out of other tanks' line of fire. That way, when you are noticed for damaging them, it will most likely be too late. If you want to be a harder target to hit, you will need to be constantly moving. Another key tactic is using a corpse shield. This is when you use another tanks corpse to protect yourself from Twins, Ricochet, Smoky and Hammer. This is helpful while reloading or trying to make a getaway from a strong tank. As Duality is a small and cramped map, you will need to control your tank with insane precision as there are many walls, buildings or props that could get in your way.

Remember, you will need to try and finish off your enemies very quickly as there will be tankers waiting to steal your kill. The best combos for this would be Firebird and Hammer as they are extremely high damage turrets.

Overall the best combos would be Firebird, Freeze, Isida, Hammer or Ricochet on top of a Wasp or Hornet.

Capture The Flag in Duality is reversed. That means that the blue flag is in the Red team's base and the Red Flag is in the Blue Team's Base.

Duality is not really a distinct defending/offending type map. As it is so small, it becomes everyone’s responsibility help out in both attacking and defending. You can still play in a defensive position, but defending won’t be your only responsibility as you will need to help out the attack as well. It is also best to have one main person acting in a defensive way, as two will not only get cramped but the attack will become weak. As the flags are reversed, you won’t be stopping the team from getting the flag, you will be stopping them from capturing the flag. This is most easily done with High Impact and Damage Weapons and Heavy Hulls. You will do a lot of pushing so Titan will work out to be the best in this position.


If you want to play well in a defensive position, Twins, Ricochet, Smoky, Hammer or Thunder are the best turrets, as they can do the job in defence then turn around and help out the attackers. When mounted on top of a Titan or Mammoth, they provide a strong defence as well as a worthy attacker. Magnum could also do well to support the attackers, but keep in mind that in a small map as Duality you will probably deal a lot of self-damage. As the flags are reversed, you won’t be stopping the team from getting the flag, you will be stopping them from capturing the flag. This is easiest done with high damage weapons and heavy hulls. You will do a lot of pushing so Titan will work out to be the best in this position. Use high impact weapons with caution. The impact may push their hull up on top of yours and give them an easy capture.

Again, Duality is not really a distinct defending/offending type map, so it is everyone’s job to help out with both attacking and defence.


An Isida is definitely needed in CTF. As you have to capture the flag in the enemies’ base, this means you will get shot at greatly while trying to capture, so an Isida can help you stay alive. Another role, which would be best for either a Firebird or a Freeze, is the member that tries to wipe out the other team to make a path for the flag holder. They also go after the opposition when they have your flag. Supplies are likely to be needed, but you can easily severely damage 2, 3 or 4 tanks.


Finally, the flag holder. They should have a strong but well armoured and quick tank, like Hunter or Viking partnered with Smoky, Hammer, Ricochet or Twins. You will need to use double armour now and then, but you will get a stack of points for capturing the flag. Try to stay away from the other attacker to give the opponents two different places to focus on, while trying to protect your Isida.

In Duality, there are 3 control points. One in the middle and one on either side of the map. As the middle one is extremely exposed, you are extremely vulnerable while trying to capture it. Mammoth and Titan can work, but they are quite slow so you risk being damaged a lot while trying to get to the point. However, they are great at targeting the side points. Hunter, Viking and Dictator can all get to the middle quick enough, yet still have enough to rough it while trying to capture the point. Due to how easy it is to get hit from basically anywhere in the map, the heavier the better when it comes to these 3 hulls.


If the point is in the opposition’s control, stay in your base and fire at your enemies. It is really easy to hit them as they have nothing big to shield them. The optimal weapons for this would be Ricochet, Smoky, Thunder, Railgun or Vulcan. You also have the option of going in with Firebird or Freeze and attempting to wipe all the people guarding the point out, but as always, this generally requires a few supplies.
Having an Isida isn’t necessary as the teams are small but an Isida used properly can really help out the team, as long as the Isida stays protected.