Guide to playing in Deathtrack

When using Shaft or Magnum, it is critical to remain undetected so that you can use your camping spot for extended periods of time. However, if using Railgun, Thunder, Smoky or Striker, you can choose to pick the closest possible camping spot every time you respawn. This allows you to fly under the radar, as people will lose track of where you are. This may not necessarily be the best for achieving high D/L’s but is best when trying to rack up kills. If planning on moving around, use Viking or Hunter.

Due to the map being absolutely massive, camping spots must be identified and properly utilised. The following screenshots show some proposed camping spots: 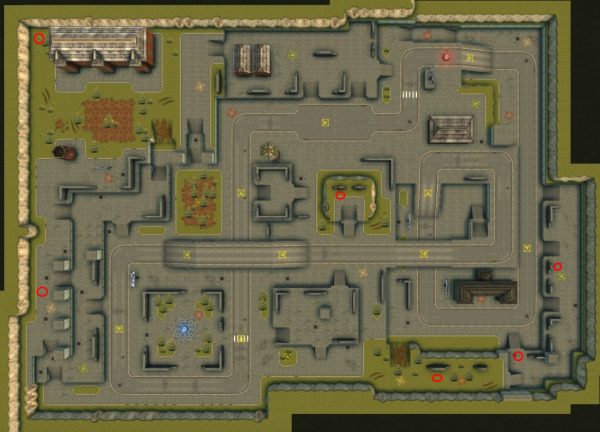 It is crucial to try to stay near drops, as controlling them will give you a massive advantage. Make sure to always evaluate where the “hotspots;” or populated areas are. Each long range turret has its own set of advantages and disadvantages in this map. Thunder is perfect for taking out hordes from a medium distance, whilst Smoky is good at singling out weaker tanks who are distracted. Railgun is great if trying to camp from a far distance, as it is basically perfect here. As long as a Railgun is unthreatened, it will easily reap kills. Shaft and Magnum are best when isolated from everyone as it will almost certainly lose every medium/short range encounters. If planning on camping for extended durations, use Titan or Mammoth.

Having at least a few players in a TDM match with a D/L of more than 2.0 can be a game changer and match winner. Going by that theory, using the same “Camping” strategy from the aforementioned set of tactics can be beneficial. The “Nomadism” technique can also be useful for finishing off enemies. Short ranged turrets won’t be very useful due to the sheer enormity of the map. However, an Isida or two can be useful to replenish allies. The beauty of Deathtrack is that its spawn zones are relatively clumped up, meaning that Thunder is perfect for spawn killing enemies from a safe distance. The map props can also be utilized for splash damage. Using Thunder, Smoky or Railgun to spawn kill enemies can prove to be a stroke of genius. Likewise, using a Magnum to target hordes can also prove to be quite handy.

Attacking in groups is your best option. Make sure to stay protected against high-damage and splash turrets such as Railgun, Thunder, Magnum and Striker. Try to coordinate one flag carrier and the others can kill all the defenders and spawn kill enemies. The attacker should try to use Smoky, Hammer, Railgun or Ricochet - decently ranged turrets which won’t inflict too much self-damage.

Using the “Swarming” tactic, you can also activate Overdrive just before entering the enemy base and finish off all the defenders quickly. This gives you 30 seconds to wreak havoc - plenty of time to kill all the defenders and slow down around two waves of respawns.

Similarly to TDM, splash and high damage turrets such as Railgun, Striker, Thunder, Smoky and Magnum are perfect. Striker becomes extremely valuable as it is very difficult for the flag carrier to escape without getting hit by the salvo. Due to the large area of the map, defending with a heavy hull may not be the smartest of the decisions, as manoeuvrability and changing defensive spots can be very difficult. However, a Shaft, Vulcan or Titan who isn’t planning on moving too much throughout the course of the battle, pairs well with a heavy hull, as they can last much longer. Furthermore, some Isidas should probably be present to keep defenders’ health intact.

Deathtrack has 5 points; those obviously being Point A, B, C, D and E. These can be seen below: 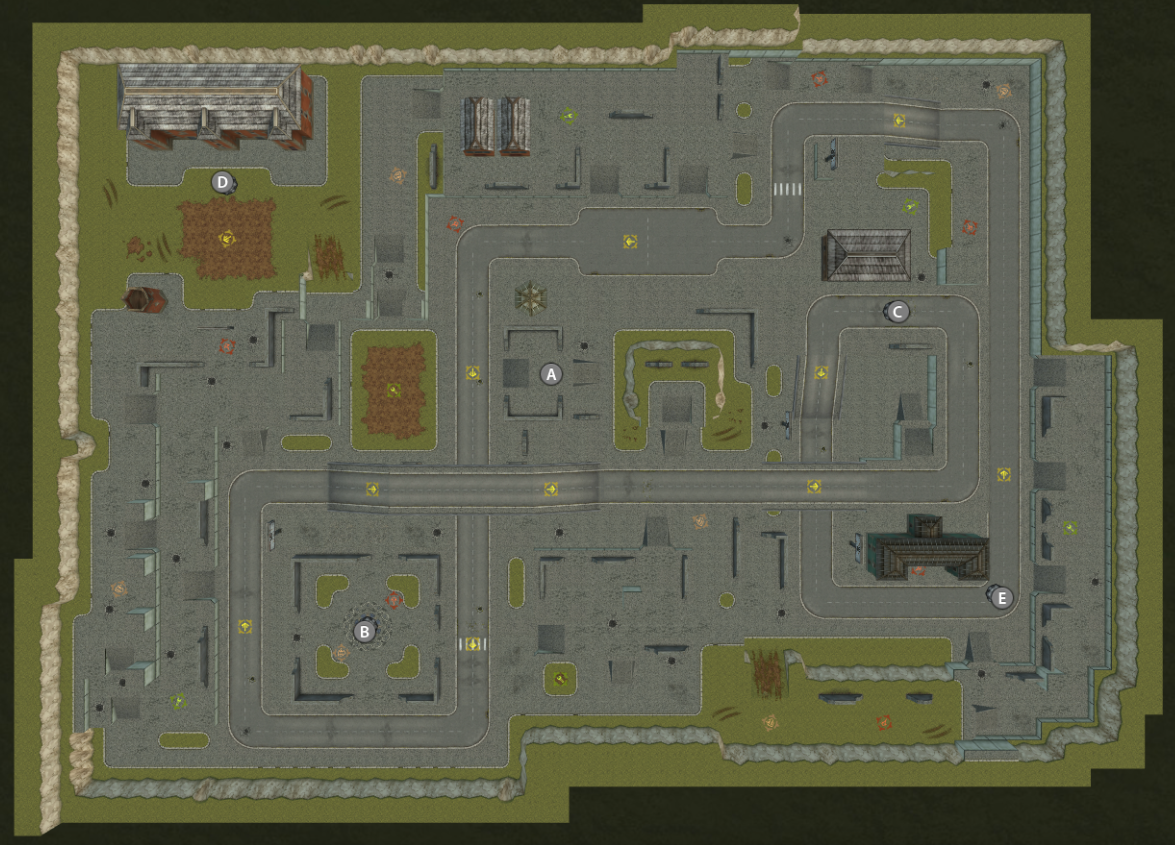 However, A, B and C are the ones which are usually the “hottest.” Point D and E usually are captured, then left alone for a while due to the inconvenient location. This means that there is often some heated combat for possession of Points A and B. Point A becomes an easy target because when trying to capture it, the tankers become enclosed in the square walls surrounding the point. This allows for turrets like Thunder and Ricochet to absolutely dominate. Point B is slightly more open but the mini walls must be utilized. The barriers offer great protection from enemy fire but the gaps allow for enemies to sneak in shots with little chance of being hit. Turrets that prosper here include Railgun, Smoky, Thunder, Ricochet and Hammer. Point C becomes the easier of the main three to capture. The nearby house gives great protection and the ledge grants a quick and safe getaway. From Point C, you have a relatively unpopulated route taking you straight to Point E, where you can hide behind the house. Point D is by far the furthest from any other Point, meaning that you should only try to capture it if it isn’t too out of the way for you, otherwise it will simply be a waste of time. Camping is not required in CP, unless it is whilst you are still holding points. Do not try to isolate yourself.