Guide to playing in Combe effectively 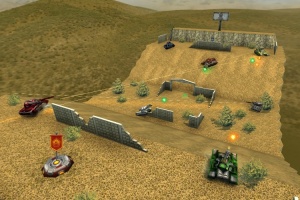 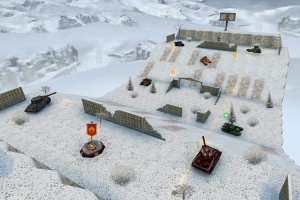 Overview: Combe is a very small map with a design is almost exactly opposite to Hill It is quite common around the low ranks (Recruit-Warrant Officer 5). There are a few good battles on active servers.


It is the home to some high fund battles. As it is so small, there is no time needed to drive back to where the action is because you spawn in the middle of it.


In CTF, keep in mind that the flag sides are opposite to normal (Red Team spawns by Blue Flag, Blue Team spawn by Red Flag)

On Combe, Deathmatch is quite different, as you can’t really camp in one spot for the whole game and steal everyone’s kills. The best way to finish top in a Deathmatch on Combe would be to keep moving around. Moving targets are much harder to hit, especially at close range or when they are below you, so this will probably be your best bet at staying alive. The best turrets for this tactic are Firebird, Freeze, Hammer, Twins and Ricochet mounted on top of either a Hornet, Hunter or Viking. Twins is also an awesome weapon to use in a Combe Deathmatch as it has a really big vertical angle. It can be sitting in the middle or on one of the sides and hit almost anything on the hills and the constant fire makes it super hard for your enemies to retaliate.


If you wanted to camp, you could camp up behind one of the fences, but doing this means you have to wait for your enemies to come to you. You’re best to use Titan for a camping strategy as it doesn’t completely sell off manoeuvrability and speed for a mountain of health points. Twins, Ricochet, Smoky or Vulcan would be the best turrets, as they have quick or infinite reload time, decent range and very good impact force. Quite often you will have someone attacking you from both the front and the back, so as always, target the weakest player.

About 80% of the time, a TDM will be a camping war, so being able to get into the opposition's base can win you the battle with ease. For the campers, one should be positioned on one side of the fence and one using the “dent” as a hole. The best turrets would be Shaft (for the “dent” position), Smoky, Railgun”, Thunder or Vulcan. An Isida backing them both up makes for an awesome team, one that not only deals high damage but is really hard to take down. Magnum, however, is a totally different story. It can simply hide behind the barrier and fire shots off at the enemy base with close to no chance of receiving return fire. Similarly, Striker can be a helpful camper.


For a sole attacker trying to get into the opposition's base, you will need a hull with reasonable speed and health. Hornet is a good hull for this as it is quick enough to get to the other side and can take a few hits. Hunter and Viking are also worthy competitors. Once in the enemies’ base you will need to deal as much damage as possible before being killed, which is why high damage turrets like Firebird, Hammer and Ricochet are the best to use. Freeze can also work very well as its freezing ability makes it hard for the other team to turn and shoot you or get out of the way.

Combe is not really a distinct defending/offending type map. As it is so small, it becomes everyone’s responsibility help out in both attacking and defending. You can still play in a defensive position, but defending won’t be your only responsibility as you will need to help out the attack as well. It is also best to have 1 main defender, as 2 will not only get cramped but the attack will be weak. As aforementioned, Magnum and Striker are fantastic for defence. Due to their power in defence, they also make useful support turrets, as they can kills swarms of pursuing enemies.


If you want to play well in a defensive position, Twins, Ricochet, Smoky or Thunder are the best turrets, as they can do the job in defence then turn around and help out the attackers. When mounted on top of a Titan or Mammoth, they provide a strong defence as well as a worthy attacker. Your best position to sit would be on top of the flag, so to get to the flag, they have to either kill you or push you out of the way, both are quite hard. Be careful of Wasps and Hornets jumping onto you, as then they don’t need to shoot, push or even bother about you. As they are so light though, generally a shot or 2 can put them off.

Again, Combe is not really a distinct defending/offending type map, so it is everyone’s job to help out with both attacking and defence.


An Isida is definitely needed in CTF. As you have to capture the flag in the enemies’ base, this means you will get shot at heaps while trying to capture, so an Isida can help you stay alive. Another position, which would be best for either a Firebird or a Freeze, is the one that tries to wipe out the other team to make a path for the flag holder or goes after the opposition when they have your flag. Supplies are likely to be needed, but you can easily wipe out 2, 3 or 4 tanks.


Finally, the Flag holder. They should have a strong but well armoured and quick tank, like Hunter or Viking partnered with Smoky, Hammer, Ricochet or Twins. You will need to use double armour now and then, but you will get a stack of point for capturing the flag, which offsets it slightly. Try to stay covered up by the other attacker, while protecting your Isida.

In Combe, the control point is in the middle. As there is a hill to get down to the point, when you are extremely vulnerable while going down. Mammoth and Titan can work, but they are quite slow so you risk getting damaged a lot while trying to get to the point. Hunter, Viking and Dictator can all get down quick enough, yet still have enough to rough it while trying to capture the point. Due to how easy it is to get hit from above and how hard it is to retaliate, the heavier the better when it comes to these 3 hulls. Ricochets bounce comes into effect while playing on Combe. As you can be at the bottom and due to its large vertical angle and bounce, it can hit a lot of tanks that are resting on the hill.


If the point is in the opposition’s control, stay on the hill and fire down on your enemies. It is really easy to hit them while that struggle to get out of the way or hit you back. The optimal weapons for this would be Twins, Ricochet, Smoky, Thunder or Vulcan. You also have the option of going down with Firebird or Freeze and attempting to wipe all the people guarding the point out, but as always this requires a few supplies. Splash turrets are the go-to for CP-horde scenarios. A Striker or Magnum simply firing towards the horde makes for easy kills.


Quite often, there is a Hornet, Hunter or Viking with Railgun that sits up in the base and shoots at the enemies when they spawn, which means they already have a decent chunk out of their health before they even think to move. This is a good tactic, but the Railgun must be prepared to leave his camping position help out the team if needed.


Having an Isida isn’t necessary as it a very hard map for an Isida to play on due to lack of range and it only being able to damage 1 person at a time. However, an Isida used properly can really help out the team, as long as the Isida stays protected