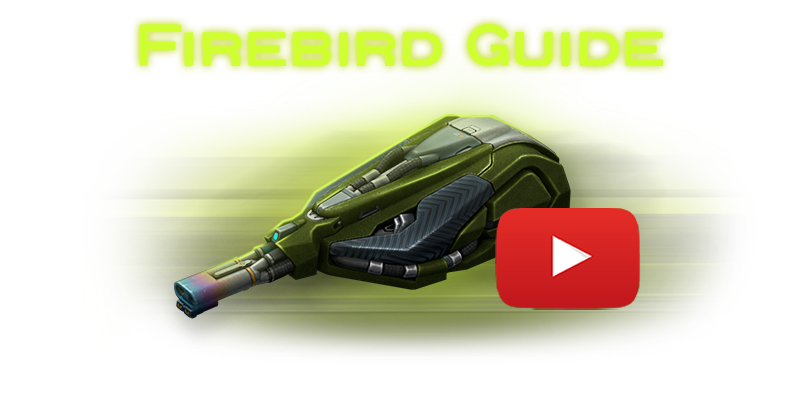 Who doesn't love a good flamethrower? Fortunately, Tanki Online has its very own - the aptly named Firebird.

Firebird, at its core, is a flamethrower. No more, no less. As it sprays napalm at an enemy, it deals standard damage in a cone, similar as to how Freeze would. When it stops, however, the enemy continues to take damage in small doses thanks to this weapon's most valuable aspect, known as ‘afterburn’. While Firebird has an unconformative conic spray zone, it cannot pierce through other tanks -- this means that allies and destroyed tanks can prevent you from damaging anyone behind them, so flame wisely!

One may see Firebird on everything from the fastest to the slowest of hulls, but like most turrets, there are a select few that maximise its characteristics. Firebird works wonderfully with light hulls and even Hunter, but some might include Hornet from that list on the grounds that it combines the worst points of both, such as Firebird's dangerously quick rotation speed and Hornet's lack of manoeuvrability. Viking and Dictator have opportunities to become deadly on medium sized maps with high building density, so they can sneak around effectively and retain great quantities of health. Titan and Mammoth only work well with Firebird on the smallest of maps, such as Island or Combe.

Firebird is a natural offensive threat in CTFs for its invaluable ability to injure opponents from beyond the grave. This is especially effective on defenders, of whom have their health slowly whittled away as more tanks begin an onslaught. TDM and CP allow it to become an excellent supporter in both damage and crowd control, but an overwhelming number of bullets will vanquish a lone user quickly. Without any tethering to teammates, Firebird has a more difficult time in DM mode, since its burning effect sometimes opens up opportunities for high damage weapons like Railgun or Thunder to spirit away kills that could have belonged to you. At the same time, dealing immediate damage is no issue for a Firebird, letting it sweep through crowds of injured to finish them off swiftly.

Playing with Firebird results in very fluid combat. The short range commands its owner to continue moving and seek out enemies, instead of hunting within a limited range. When you do, you must burn them on the run and immediately speed off to find more enemies, as a Firebird has a limited fuel tank and can't deal damage indefinitely. Use this opportunity to seek a point, defend the flag or capture one.

Bottom Line: If you own a fast hull and enjoy a high damage support role in team matches, Firebird will work well for you.

Firebird is available from the earliest rank, Recruit, and is fairly inexpensive at 150 crystals. The M1 modification is available at First Sergeant. Unfortunately, you pay for this early unlock by having to wait through 11 ranks and 370,000 experience points before the M2 modification is unlocked at Major. It's recommended to either pump the gun with a considerable number of micro-upgrades or buy another turret to use during this waiting period, lest the turret's underwhelming damage rate leave you stranded at Third Lieutenant without a crystal in your pockets.

Should you take the alternate path and choose a second turret, make sure its unlock ranks are staggered with those of Firebird. Thunder, Hammer and Railgun are good examples of this, as they introduce new gameplay styles and their M2 counterparts can also be purchased in the meantime. If you're looking for the full Tanki Online experience, then taking both a long and short ranged weapon would be a wise decision, as it not only diversifies the number of maps you can perform exceptionally well in, but it also develops skills on both the sweeping and aiming fronts.

Using Firebird is very simple: point the turret in the general direction of your opponent and hold down the spacebar. When you let go of the spacebar or run out of charge, the turret will immediately start reloading. However, reloading takes a considerable amount of time, nearly six seconds. Unless you're up close and personal with an opponent, Firebird isn't gonna do jack, since it has an effective range of only 25m. This makes Firebird one of the five "proximity weapons", or weapons that can only deal damage after a certain range.

There are many more nuances to using this flamethrower than may first appear. To begin with, Firebird only has five seconds of charge. This may seem like a lot if you only have one opponent, but it has a nasty habit of disappearing when a couple of players gang up on you. To get around this handicap, one may take advantage of the afterburn effect of Firebird in several different ways.

The first method is the peek-a-boo tactic: pop out from cover and spray your adversary. A word of caution: if you don’t burn your opponent for long enough, they will either not be set alight or will only burn for a pathetically short while. Now, avoid them for as long as reasonably possible by fleeing in the opposite direction. In doing so, you may be safe while your Firebird is reloading, leaving your opponent to take damage. Fast hulls are ideal for this tactic, since fleeing isn't exactly a Titan's strong suit.

Style B is identical to Style A in the first stages; peek around a corner and set your opponent on fire.

Now, instead of running, you must hustle back around the corner and intimidate your opponent through a show of force to keep him from coming around the corner and attacking you. A series of short “puffs” will usually do the trick. Yes, this seems silly, but a surprising number of players will be intimidated by this bluff. Use this strategy only if you are slower than your opponent and one or more of the following apply:

1) You are nearly out of fuel

3) you do not believe you can kill your opponent with your remaining charge because he is well protected.

This tactic has several drawbacks. One is that you use some of your precious charge and it will not scare off all opponents. Use it sparingly and only when you're cornered; it also works well on some ramps.

The second method of utilising Firebird’s afterburn is only useful with a fast hull, such as Wasp or Hornet. Speed along and spray everyone nearby, spreading the pain like... wildfire. Try to spray them just long enough to set them on fire, then move on to the next opponent. It is imperative that you are gone by the time they realise what just happened.

Often times, varying combinations of the Drive By and the Peek-a-Boo tactics work the best. Each strategy is very much dependent on the situation, depending on the amount of open ground on the battlefield.

When you are at an altitude higher or lower than that of an opponent, rock your tank back or forth to aim your turret slightly up or down. You can do this by driving in one direction and suddenly changing direction. This will tilt the front of your hull either upwards or downwards, depending on which direction you moved last. This allows you to aim your turret at a higher or lower angle for a very brief period of time before gravity pulls you level once more. Much practice is required before one can effectively use this technique. Spraying an opponent in this way may not destroy them, but it often will set them alight; this gives you a slight advantage when you meet them face to face if they don't dive to your level first. Remember that Firebird has a conic angle of 10° from the centre, allowing you to sometimes deal damage without having to rock at all. Just watch for the colour of their tank to tint slightly more red.

Another way to change the angle of aim for your turret is to make use of inclined surfaces. If your foe is above you, drive the front of your hull onto the bottom of the ramp. Vary how far you drive up the ramp to adjust the vertical aim of Firebird. Opponents catch on to this trick very quickly and will back away, so you must be able to aim quickly before this tactic becomes effective. Likewise, a tank can drive entirely onto the ramp from the top to spray at enemies below.

You will never be a great Firebird user if you don’t enjoy burning opponents to a crisp. So whatever you do, make sure you follow this one, final tactic: Have fun!

For more information, check out the Pro's advice on Firebird in the Tanki Online V-Log here.