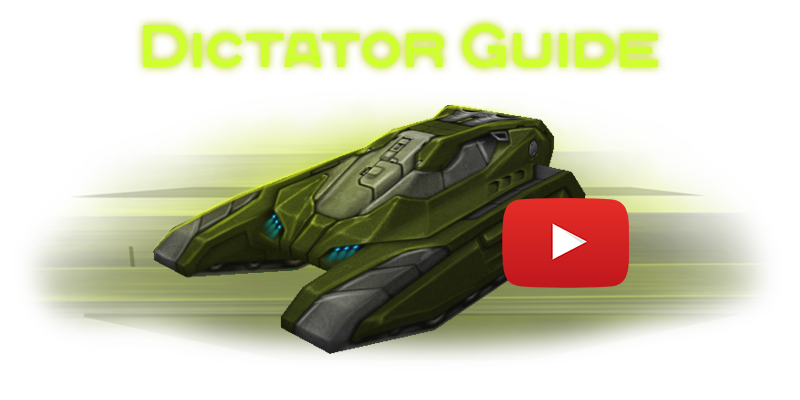 Due to the high planting of turrets, sometimes tanks that have a low height, come too close to Dictator and fall in the “dead zone” and can freely shoot the Dictator without receiving any damage

What to do when using Dictator

Dictator is the last of the three medium hulls and being the biggest making it a popular option for catching gold boxes. Dictator has a very team-oriented overdrive: your tank and all allies within the area of effect will be repaired and buffed with Boosted Armor, Boosted Damage and Speed Boost, supplies as well as dropping a Mine each. It will also split 50 overdrive percentage points among the surrounding teammates, and reward the user with 20 battle points if they share it with at least one teammate. Enemies within the Overdive's range will get frozen. This is very useful in mostly defending such as giving your allies opportunities to attack while keeping everyone at maximum health.

Dictator, just like Viking, works best with long-range turrets: Smoky, Thunder, Railgun, and Shaft. Using its height, a player with Dictator can shoot using those turrets and hit places that cannot be hit by others. And so Dictator is great when paired with Saboteur drone, Saboteur drone is great for closing off entrances to secluded bases, like in Barda or Bobruisk and can terminate enemy entry permanently. Dictator is also great when paired with turrets like Railgun/Shaft as its higher elevation can allow players to make shots that it otherwise might not have.

For a game with Dictator, the most suitable maps are the mid-sized ones, with the presence of hiding spots that will allow shooting from inside them. Dictator feels confident in any game mode. Dictator is very useful in Team Juggernaut mode as the Juggernaut has a constant overdrive of reload of 40 seconds, a Dictator will significantly speed this up allowing their team to prosper.

- Dictator wasn’t in the game from its very beginning, but as soon as it was added (in 2009), it immediately gained respect among players.
- People usually call Dictator “Dic” or “Dict”.
- Dictator’s turret is shifted backwards. Therefore, while playing with a close-range turret, it’s definitely worth turning your tank and driving stern first (backwards, while keeping the turret facing the direction you’re moving) to reduce the distance of defeat.
- Dictator M3 + Railgun M3 was the gold standard of clan wars before the graphics update and rebalance of 2012.
- It's popular among parkourists and gold hunters because of its height.
- Dictator is the only hull that did not receive a new overdrive but an improved version of the old one.

Retrieved from "https://en.tankiwiki.com/index.php?title=Dictator_guide&oldid=38859"
Category:
REQUEST TO CUSTOMER SERVICE
We have recieved your request for our services and we will get in touch with you shortly.
Report a problem