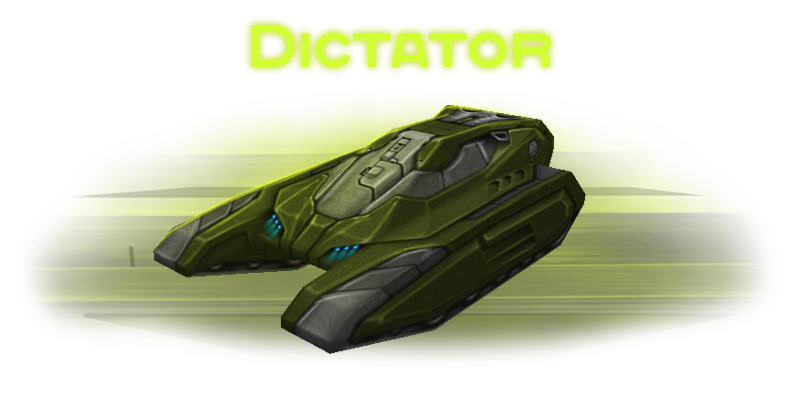 An oddball of the Tanki Online world, Dictator is one of the more unique hulls the game has to offer. A medium hull that borders the realm of the heavies, Dictator has high torque, mountains of weight, and an unusually tall stature. This vantage point is what makes this hull stand out from others, as a turret-mounted on this hull can fire over obstacles that other tanks would deem insurmountable. Couple that with the turret's placement on the rear of the tank, and many advantages for hiding locations and firing positions become readily available. However, unless you're crawling around in a Ping-Pong, a mid-to long-ranged weapon does best on Dictator, as it's the slowest of the medium hulls and has a fairly poor acceleration speed.


Thanks to an improved system of active protection and the latest composite material used in its construction, this hull successfully absorbs the energy of explosions from a round of any caliber, while still remaining a medium hull. Activation of its overdrive will force both attack and defensive supplies of the tank and nearby allies to activate. You will be fully repaired, extra protected, and gain more speed, plus also drop a mine. Pre-installed overdrive reactor doesn’t require user’s supplies to work. The owner of such hull can easily lead the team into a full assault, taking the blunt of the attack, thanks to the size of the hull making it a perfect target for the enemy.

Retrieved from "https://en.tankiwiki.com/index.php?title=Dictator&oldid=40099"
Category:
REQUEST TO CUSTOMER SERVICE
We have recieved your request for our services and we will get in touch with you shortly.
Report a problem