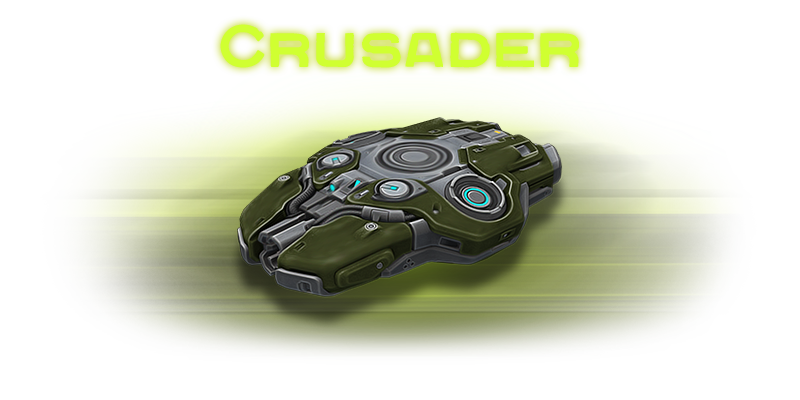 Thanks to the never-ending work of its engines the Crusader hull can hover over the ground at a low altitude. When Crusader is placed under enemy fire, it tries to return itself to a stable position. If the roll limit exceeds a certain maximum, the engines will fail and Crusader will flip.


Crusader’s unique overdrive shoots a sharp icicle. It flies very fast and shatters ice when it hits a static obstacle, dealing frosty splash damage. The icicle strikes tanks that are at any distance of the icicle's path. On impact, it deals damage to enemy tanks and applies an armor-piercing effect.

Medium hull. It hovers above the surface and can pass through any harsh terrain without difficulty. Use its overdrive to shoot a big icicle which can neutralize enemy tanks at large distances.


Second generation hover tank: to create a compact but powerful hull with attacking possibilities, a lot of ingenious solutions were used. Compactness of the second generation anti-grav allowed engineers to equip enough armor to the tank for it to be a medium hull without decreasing its speed. Attacking capabilities are provided by the built-in cannon. To meet the size requirements, instead of a super-powerful weapon, a cryo generator was installed. It makes a shell from almost nothing by cooling moisture and then shoots a big armor-piercing icicle. After being hit by the chunk of ice, the opponent's cannon will be frozen making it easy to finish off the tank, if not destroying it.

Retrieved from "https://en.tankiwiki.com/index.php?title=Crusader&oldid=38809"
Report a problem