see also: About the game and Format Battles

There are many ways to play Tanki Online, each with its unique advantages and challenges. Here you can learn about all of the modes available in the game.

When you click the Play button or select a mode from the menu, you will be placed into a Matchmaking Battle, which is created automatically and filled with players of similar rank. These modes tend to reward the most crystals, and you can complete your Missions here. 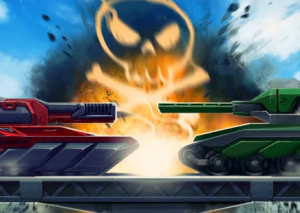 )
In TDM, Battle mechanics are very similar to Deathmatch mode. The only difference is that here, players work in teams. The goal is to destroy more tanks than the opposing team. Every team member is responsible for the result, as the battle’s final score depends on how well and how carefully they play. A team gets 1 point for every destroyed tank. In the case of self-destruction, the opposing team doesn’t get any points.

This mode is also available in PRO battles. 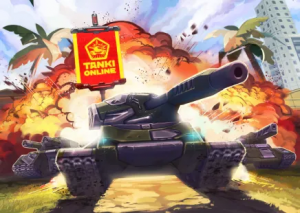 )
Players are divided into two teams. The goal is to take and capture the enemy’s flag, and to prevent the opposing team from capturing yours. If you take the flag and then get killed, you lose it and the flag is dropped where you were killed. However, your teammates can retake it and continue. If the flag is touched by an enemy’s tank, it automatically returns to the flag holder (generally in the enemy's base). The same applies to your team’s flag. To capture the flag, you need to pick up the enemy’s flag and bring it to your flag. For the capture to be successful, your flag needs to be at your base. Victory goes to the team that has captured the most flags by the end of the game, or who reaches the target amount of captures specified in the battle settings.

This mode is also available in PRO battles, and is the most popular type. 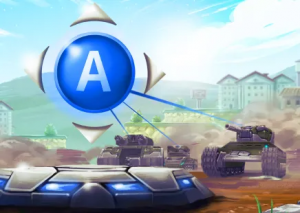 This mode is also available in PRO battles, and is one of the most popular modes in small maps. 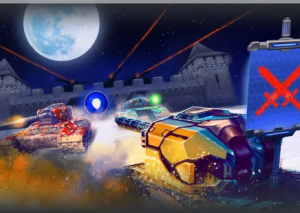 )
Assault mode is unlike any other mode in the game - it combines the strategic element of capturing flags with the defending setups of control points. Players are divided into two teams, one which takes a flag from its area and tries to capture it by driving over or hit the defending team's base. Every flag delivered gives five points for the attacking team. The objective of the defending team is to prevent the attackers from successfully delivering the flag. The defending team scores a point for each destroyed enemy tank (similar to TDM). Successfully capturing a flag requires a lot of teamwork, skill, and timing.

This mode is also available in PRO battles, though rarely played. 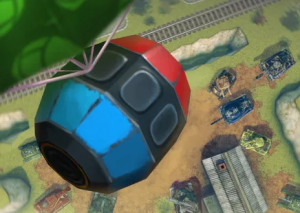 )
In Rugby battles, each map has two bases — Red and Blue — and several drop zones for the ball. The ball will be dropped in one of these zones, chosen randomly, and it will have a parachute, similar to supply drops. The objective is to take the dropping ball, team up with a number of your teammates, break into the enemy's line of defense and capture the ball. If the person carrying the ball gets killed, the ball will drop onto the ground and can then be picked up by another player, of either team, but this must be done before a time period after which the ball will randomly drop on the specified zones in the map. However, if it arrived on a parachute to a drop zone and nobody has picked it up yet, it will remain in place indefinitely. If it was dropped by a player or from a pass, after a time it will disappear.

The coolest feature of the mode is the ability to pass the ball to another player. If you press the F key (or the key you bind to dropping the flag), the ball will shoot in the direction your turret is currently facing, and it will bounce from any obstacles. This way, you can pass the ball over a low obstacle or an enemy tank.

If you see an enemy running away with the ball, you absolutely should destroy them, as you will be able to pick up the ball and begin your own attack.

Remember that you can't score a goal by passing the ball through the capture point at the enemy base. You need to deliver the ball as a tank, like a flag in CTF.

This mode is also available in PRO battles. 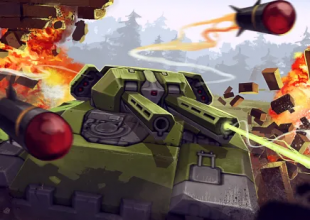 )
Similar to Juggernaut mode, but now there are two! One tanker on each team controls the unique Juggernaut tank. When the Juggernaut is destroyed, the super tank goes to the next teammate who went to respawn (with the exception of self-destructing ones). For each destruction of the enemy Juggernaut, the team receives 1 point. The task of each team is to destroy the enemy Juggernaut more than once the enemy does. Battles are limited either by some points or by time.

Juggernaut consists of the turret Terminator and the hull Juggernaut, hence the name of the mode. Terminator is a special turret that sports the ability to fire with two different modes. Using the long dual barrels, it can send out concentrated bursts of energy that penetrate the armor on enemy tanks and deal damage from the inside out. If cool effects aren't your thing, Terminator can also deploy its rocket launch system from the sides, lock on to enemies with a laser and shoot a salvo consisting of six rockets.

This mode is available only in Matchmaking battles. 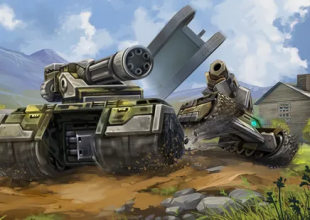 )
Two teams will be against each other fighting to obtain one point at a time. A team must Hold and control of a point and keep the enemies away from it at all costs. Once the team captured the point, they will move on and capture the next one. The captured point will turn off and a new random point will turn on. The team that captured the most points wins.

This mode is also available in PRO battles, though rarely played. 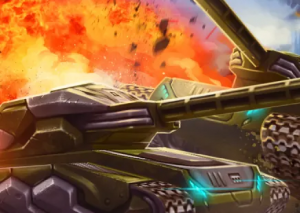 )
In Deathmatch mode, unlike in team battle modes, everything depends on you. The battle fund grows a lot faster than in CTFs and TDMs, as you don’t need to go to a certain position to find enemies; they are everywhere. On most maps, you can open fire right from your spawn point. Deathmatch is the simplest and most reliable battle mode when it comes to earning crystals. The battle can be limited by either time or number of kills.

Sometimes, during special events, DM is available as a Matchmaking mode.

Sometimes, there are special events in Tanki Online where you can join special battles. They're exciting, different, and sometimes very unique!

)
Juggernaut is a special event mode very similar to Deathmatch (DM), but with a slight twist. At the beginning of a match, the server randomly picks one person to become the "Juggernaut" - a tank with super-enhanced capabilities like increased armor, speed, and reload time. The goal of the mode is to try and find, then destroy the Juggernaut; and the player who does so becomes the next Juggernaut, and the cycle continues.

Juggernaut consists of the turret Terminator and the hull Juggernaut, hence the name of the mode. Terminator is a special turret that sports the ability to fire with two different modes. Using the long dual barrels, it can send out concentrated bursts of energy that penetrate the armor on enemy tanks and deal damage from the inside out. If cool effects aren't your thing, Terminator can also deploy its rocket launch system from the sides, lock on to enemies with a laser and shoot a salvo consisting of six rockets.

Sometimes, special event modes put an unexpected twist on an existing mode. Here are some of the events that have happened in the past:

Retrieved from "https://en.tankiwiki.com/index.php?title=Battle_modes&oldid=39130"
Report a problem