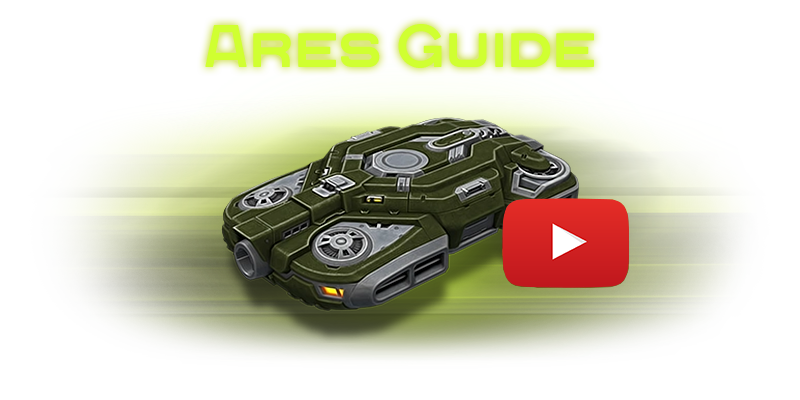 A guide to Ares

Ares is a heavy hull which was added to the game recently. it is a very special hull, this hull isn't driving on the ground but hovering over it, and not only that, he can also turn sideways if mouse controls are activated. In the following guide, we will review the pros and cons of Ares, its special features and also a bit of Ares's history!

Ares was officially released on 14th of August 2020, but we have started hearing about the new hull tanki is about to release a long time ago. Tanki would tell the community about the development of Ares here and there in different V-LOGS. Time passed and many tankers thought Ares would never be released but it eventually happened. Surprisingly, the idea of a hovering tank was suggested 6 years ago by a tanker that goes by the name of DaveZm on the forum.

As mentioned above, Ares can move sideways, it can be very helpful in situation where you are being blocked from the back and the front as well. You will be able to escape very easily while players with other hulls would be stuck there, don't forget you need to have mouse control enabled in order to be able to move sideways.

Due to the special hovering feature, it is almost impossible to get flipped with Ares. You shouldn't be afraid to jump from high places, or hesitate to drive on a ramp when the enemy players are trying to knock you down from the upper side. In most scenarios you will be just fine.

Another very useful feature of Ares is its overdrive, BFG. When activating Ares's overdrive, a plasma ball is being fired and which destroys everything that comes in its way, it also heals teammates nearby. On the other hand, the plasma ball is very slow and very easy to dodge if you notice it from a long distance. In order to take full advantage of the overdrive, the first thing you need to think of is "when to activate the overdrive". You should activate the overdrive either when you are close enough to your opponents, so they won't have enough time to dodge the ball or when your nearby teammates need healing. The second thing you have to keep in mind is the ball can also heal your own tank. Don't hesitate to activate it even if you are alone, it can save you.

What never to do when using Ares

1. Don't attack with Ares, It's not Viking or Hornet. Despite the fact Ares is quite fast for a heavy hull, it's not fast enough in order to attack the enemy base in modes like CTF. His size makes him very easy to spot and shot, your chances to steal the enemy flags with Ares are very low.

2. Don't drive too fast on ramps as you may get stuck in weird places

3. Do not activate the Ares's overdrive when you face buildings, walls and everything that might make the ball explode, it will cause you to self destruct.

4. Do not activate the overdrive from a long distance, don't forget the ball moves slowly and it is easy to dodge if noticed.

5. Do not use your keyboard only.

What to do when using Ares

In my opinion, Ares can be a great support to the team. You can block your opponents from stealing flags or prevent them from reaching the capture point in modes like CP, ASL and Siege. I'd like to remind you once again that Ares can be a deadly hull if used with mouse controls, it allows you to move sideways which can be used in many situations and it also saves time since you don't have to turn your tank. Use the overdrive when you are close to opponents. The turrets you use are very important as well, but it really depends on the mode and map. For modes like CTF, long range turrets would be perfect. Simply because Ares's speed prevents it from chasing faster hulls like Hunter or Wasp. For modes like CP and Siege, your opponents are forced to get closer to you if you are near the capture point, which is why medium range turrets and sometimes even short range turrets would fit.

In conclusion, Ares is a very unique hull. If used correctly it can be very effective. Of course, it's a new hull and new tricks will be discovered sooner or later. I hope you enjoyed this guide!

Retrieved from "https://en.tankiwiki.com/index.php?title=Ares_guide&oldid=32886"
Report a problem