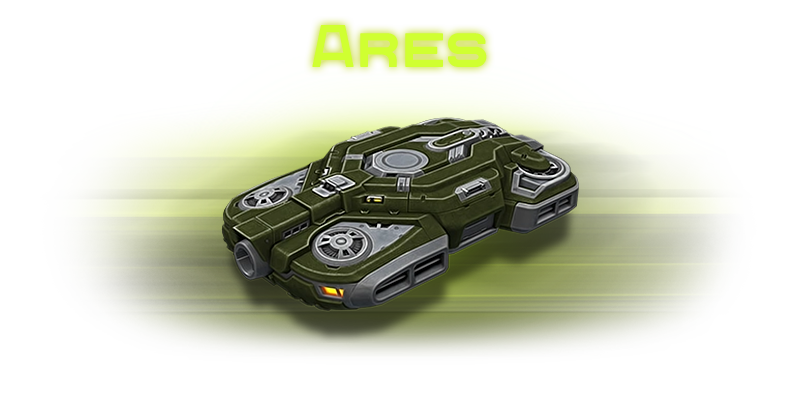 Thanks to the never-ending work of its engines the Ares hull can hover over the ground at a low altitude. When Ares is placed under enemy fire, it tries to return itself to a stable position. If the roll limit exceeds a certain maximum, the engines will fail and Ares will flip, but this is a very rare event.


BFG is the name of Ares’s unique Overdrive. This overdrive shoots a plasma ball which flies slowly and finally explodes when it hits a static obstacle, dealing splash damage. As it is flying, the plasma ball strikes tanks that are within range of the ball, healing allied tanks and dealing damage to enemy tanks while ignoring their protections. The ball of plasma is shot down by Hunter’s EMP, explodes when contacting an enemy Ares' plasma ball, and is neutralized when a Titan's protective shield generator is activated. Wasp’s N2-bomb has no effect.

Heavy hull. Remains stable even when driving under fire. Its overdrive shoots a projectile that attacks enemy tanks with lightning and heals allies.


The hovertank «Ares» became the first hull with an anti-gravity feature. The impressive weight and proportions of the first-generation antigravs predetermined the «Ares» entry into the heavy hulls category. The anti-gravity effect of the engine keeps the hull in a stable position, compensating for uneven surfaces and recoil when firing. To turn the hovertank in a battle, you need to try really hard. The uncompromising stability of «Ares» made it possible to build in a super-powerful weapon, which could not be used on other hulls: for prototypes, the first shot simply tore off the turret. Tankers say that this is the very same BFG-cannon. We do not know what they are talking about, but just in case, we ask you not to share this information.

Retrieved from "https://en.tankiwiki.com/index.php?title=Ares&oldid=40098"
Category:
REQUEST TO CUSTOMER SERVICE
We have recieved your request for our services and we will get in touch with you shortly.
Report a problem